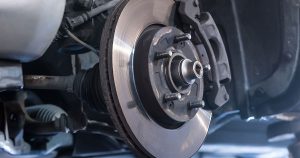 Too often, brakes don’t become an issue until they… break. Waiting for an emergency to check up on your brakes is risky business, dangerous for both you and everyone else on the road. Play it safe and assess the health of your brakes on a regular basis. The INFINITI Of South Bay Service Team is here to help.

Even though it’s called a drum, a brake drum looks more like a top hat, with the wheel mounted on the hat’s closed end. Drums are normally found in older or less expensive vehicles. There are two curved “shoes” inside the drum, lined with friction material. While the wheel turns, the shoes hold just off the surface of the drum. When you press on the brake, hydraulic fluid transfers braking force to the shoes that then push outwards to press the friction material against the rotating drum. The harder the pressure on the pedal, the more force applied by the shoes, and the faster the wheel stops.

A disc brake system works the same way as the drum system, except instead of a drum and shoes, it consists of a rotor (the disc) that mounts behind and turns with the wheel and a caliper that holds two pads of friction material (brake pads) mounted over the rotor. Pressing on the brake causes the pads to pinch the disc that rests just off the surface of the disc, similar to the shoes in the drum system. Hydraulic fluid transfers pressure to the pads, pressing them together, forcing a slower rotation of both the discs and wheels.

How To Monitor the Health of Your Brakes

Pay attention to both foot feel and sound. Your brake pedal should feel firm and hard under pressure, and pressing the brakes should result in quiet, smooth deceleration.

Bring your brakes into INFINITI of South Bay for a checkup if they display any of the following symptoms:

On the road, your brakes are your safety net, and well worth regular care. Take a break from worry with a brake health checkup at the INFINITI of South Bay Service Department.